There Are Several Characteristics And Types Of Traditional Theater 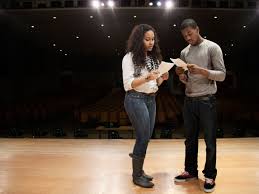 The main characteristics of Traditional Theater include;

– The language used is the regional language, with an accent and regional language style.
– Without a detailed scenario and prioritizes improvisation.
– There are elements of traditional singing and dance.
– Using the accompaniment of traditional regional musical instruments (regional music).
– Colored with jokes that invite laughter from the audience.
– Friendly between the players and the audience.
– The atmosphere of the show is relaxed.

The types of theatre that can be grouped into Traditional Theater, namely;

The folk theatre is born spontaneously in people’s lives, is lived by the community, and develops according to the cultural development of the community. In general, the folk theatre was born due to the encouragement of people’s need for entertainment, which then increased for other interests such as; the need for traditional ceremonial traditions (traditional wedding ceremonies, etc.).

The classical theatre is a theatre development that has reached a higher level in its cultivation, both technically and in theatrical style. The existence of continuous guidance and training from the upper classes, such as kings, aristocrats, or other social levels makes the quality of this type of theatre experience established. Therefore, this type of classical art was mostly born in the palace environment (the centre of the kingdom).